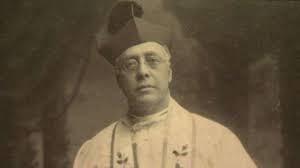 The Archdiocese of Baltimore is home to many firsts, including the Rev. Charles Randolph Uncles, who was the first African American priest in the country.

“He paved the way, in a sense, that all firsts have to do, when you’re trying to be the first, and that is to say, it is possible,” said the Rev. Tom Frank.

Frank is the Vicar General for the Josephite fathers and brothers, an order whose exclusive mission is to serve African American communities.

Uncles was the first black ordained priest in the United States and one of the founding members of the American Josephites. He was ordained in 1891 by Cardinal Gibbons in the Baltimore Cathedral.

“He, especially in those days of segregation, being an African American priest, really suffered the brunt of that and was restricted and limited because American bishops wouldn’t appoint him to position in their dioceses,” Frank said.

As a result, he was relegated to teaching in the seminary and he could not be a pastor of a church in a diocese outside of Baltimore. To become a priest, Uncles studied at a seminary in Quebec and at the Josephine seminary, which was on Pennsylvania Avenue.

The Druid Heights Development Co. bought the building and turned it into low-income housing, naming it after Uncles.

“If he was our first ordained African American priest in the country, then we found it was right to name it after him,” said Anthony Pressley, of the Druid Heights Community Development Corp.

The building still maintains some of the original architecture of the ceiling.

“You can still feel that sense of history in the room. You can also feel sacred ground,” Pressley said.

In his quest to become a priest, the Baltimore native had to attend some courses at St. Mary’s Seminary. He broke the color barrier at a time when segregation in the church was the norm.

Black clergy said Uncles holds a special place in their history and hearts.

“When I think about any obstacle that I have to face, or any of my brother deacons or priests have to face being black in this diocese, you could look at someone, like father uncles, and rewrite what he had to endure was 100 times worse than anything I endure, and that’s a great inspiration to me,” Turner said.