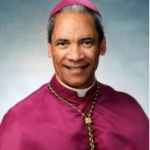 Following is a statement from Bishop John H. Ricard, superior general of the Josephites, regarding the killing of Ahmaud Arbery in Brunswick, Georgia.

As devoted ministers in the African-American community for over 125 years, the Josephites call for a complete and thorough investigation into the senseless killing of an unarmed black man, Ahmaud Arbery, in Brunswick, Georgia.

This murder is yet another example of an innocent, young black life lost at the hands of vigilantes taking matters of perceived “justice” into their own hands. It is also an example of people acting in hatred and ignorance to perpetuate violence against the African-American community.

“There’s a black male running down the street,” is the complaint Arbery’s murderer reported to authorities on a 911 call.

“Stand Your Ground” laws, police brutality, and subsequent cover-ups by “justice” officials continue to impact the lives of innocent people throughout our country, resulting in communities terrorized and lives cut tragically short.

Additionally, the recent police shootings in Indianapolis and Houston must be thoroughly investigated with profound integrity and transparency.

The Josephites call for all law enforcement agencies, including the Federal Bureau of Investigation, to investigate not only these crimes but also the parties who shielded the perpetrators from justice.

Case in point: Ahmaud Arbery was murdered on February 23rd, yet his attackers remained free for more than two months and were not taken into custody until May 7th in response to a nationwide outcry.

The Josephites stand ready in solidarity with communities around the country where we serve to do all in our ability to rid the country of attitudes, actions, legislations, and systems that deny the peace, dignity, and very lives of God’s people.