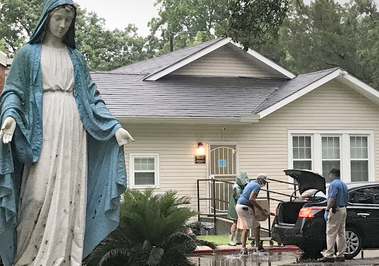 Two Thursdays a month – come rain or shine – a tenacious group of parishioners from Our Lady of Grace Church in Reserve performs what is arguably the most fundamental corporal work of mercy: feeding the hungry.

“If I can help somebody less fortunate than me, then why not? I figure if somebody needs help, it’s my duty to help them,” said parishioner Michael Arceneaux, as he and his fellow volunteers loaded boxes bursting with canned goods, fresh produce and other food staples into cars that formed a double line in front of the church.

Arceneaux, a member of Our Lady of Grace’s eight-year-old food ministry, said helping to box and dispense food twice a month is the least he can do for the food-insecure of his community. He said the provisions often constitute the only food some households will have that month.

“They’re just so appreciative when you give it to them,” Arceneaux said, observing that outreach work is a prerequisite of Christian life. “In the Bible, the good Lord says that as long as you did it for one of mine, you did it for me.”

The volunteers, who pack the boxes with items delivered monthly to their parish hall by Second Harvest Food Bank, dispense the vital assistance from 5 to 7 p.m. on second and fourth Thursdays.

At a recent drive-thru line, with rain creating ankle-deep flooding and forcing the volunteers to juggle umbrellas and dollies of food, raincoats were added to the customary “pandemic uniform” of masks and gloves.

Before the pandemic-forced lockdown, those in need would enter the parish hall to pick up their boxes and personally carry them to their vehicles. The volunteers have since shifted to a curbside set-up, with client visits and paperwork now being discreetly handled through car windows.

“The food comes in on the second Tuesday of the month. We have volunteers who come in to take the food out, stock it and make the boxes,” explained Martha Creecy, the parish secretary who has led Our Lady of Grace’s Second Harvest Ministry with her pastor, Josephite Father Christopher Amadi, since its 2012 debut. The ministry currently counts a core membership of about 20.

Creecy said the boxes’ contents vary according to availability but always include a variety of canned goods; starches such as rice, pasta and beans; fresh vegetables and fruit; and proteins such as meat, poultry and eggs.

The second Thursday of the month sees an average of 70 visitors, while the fourth Thursday serves about 40 to 50 households, Creecy said. Recipients, who must meet Second Harvest’s eligibility requirements, may only access food from the parish site once a month.

“But everybody who comes here leaves with something – even those people who turn out to be ineligible will get something the first time,” Creecy said.

Parishioner Juana Royal has volunteered for the ministry alongside her husband Kevin since its founding. She said new volunteers are always welcome and can step right in, whether it involves working directly with recipients, loading food into cars or working behind the scenes, as Royal does, to build boxes out of flat stretches of cardboard, keep the pantry’s shelves sorted and stocked, and pack the boxes themselves. Each container always includes a printout informing recipients of the distribution schedule for the coming month.

“I’ve been in predicaments where I didn’t have much and other people helped me. I really appreciated what they did for me, so I feel I need to give back,” Royal said. “God wants you to give and help and be charitable.”

Creecy said the ministry saw a surge of new applicants in April, followed by a leveling off of new numbers in May, possibly due to the opening of additional food pick-up sites in St. John the Baptist civil parish in response to the pandemic.

Creecy, a social worker who assisted neglected and abused children for 30 years, says it is her “calling and passion” ­to be of service to anyone in need. She said it is especially touching when ministry members see recipients showing up as early as 10:30 a.m. – more than six hours before the food line opens – to have some fellowship. Many bring chairs to visit with their friends under the oaks as they await the 5 p.m. start-up time, she said.

“(Feeding the hungry) is what Jesus would want us to do. He wants us to be of service, loving our sisters and our brothers,” Creecy said. “That’s what it’s all about!”

To learn more about the Second Harvest Ministry at Our Lady of Grace Church, contact Martha Creecy at the parish office at (985) 536-2613. Donations to Second Harvest Food Bank, which serves 23 civil parishes in South Louisiana, can be made at www.no-hunger.org.

Beth Donze can be reached at bdonze@clarionherald.org.