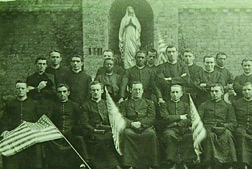 Since 1871, the Josephites have been in the mission of serving the African American community.

It began with a determined man named Cardinal Herbert Vaughn. In 1866, he opened a school named St. Joseph College of the Sacred Heart located in Mill Hill, England. Cardinal Vaughn’s greatest desire was to send missionaries into all parts of the world. In May 1870, he petitioned the pope for a mission field. The choice was the United States.

For years the archbishop of Baltimore, Martin John Spalding, had been appealing to Rome for help in ministering to the thousands recently released from slavery. In 1871, Pius IX handed down the Negro Oath, which would shape the modern-day Josephites.

In Cardinal Vaughn’s time, every missionary assigned to this duty was to sign this oath, which stated, among other things, that the priest would “vow and solemnly declare that I will make myself the father and servant of the Negroes; nor shall I ever take up any other work which might cause me to abandon, or in any way neglect the special care of the Negroes. So help me God and these His Holy Gospels.”

With the oath in hand, Cardinal Vaughn and four missionary priests set off for Baltimore. Here Cardinal Vaughn consecrated the mission to the Sacred Heart of Jesus and named his missionaries the “Josephites,” because St. Joseph was honored as the “first missionary.” Together Cardinal Vaughn and the priests established a seminary, many parishes, schools and the beginnings of an interracial brotherhood. And so it continued. Missionaries would study at the college in Mill Hill in England and then travel to America for their foreign mission.

However, overseeing an international organization was difficult. So, in 1893, Cardinal James Gibbons of Baltimore offered to accept the Josephites as an independent organization and Cardinal Vaughn gave his consent. Father John Slattery became the first Superior General of the new American Josephites and set the direction of the newly independent society.

What began as a mission to help the newly freed slaves in America, evolved into the broader task of assisting all of the Black community. The Josephites continue in the tradition of Cardinal Vaughn and by the commission of Pope Pius IX, as a society dedicated solely to the service of the African American community.