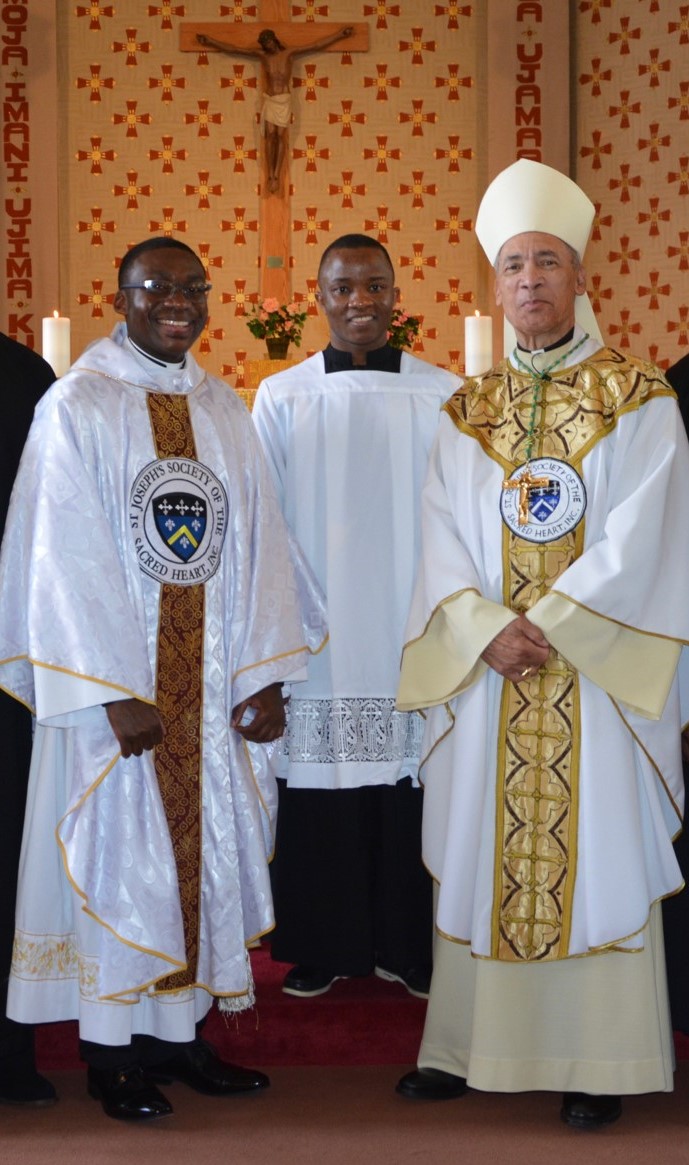 As Father Fred Kaddu was ordained a Josephite priest May 23, just ten people were physically present at St. Peter Claver and St. Pius V church in Baltimore to witness the sacrament.

The virtual congregation, however, was much more robust.

Nearly 150 devices were livestreaming the ordination on YouTube. Within a few days, nearly 900 people had watched on YouTube.

Father Kaddu, 32, originally from Uganda, said the location of the Mass was changed three times because of the pandemic. His mother and family, which includes two brothers and a sister, had to watch from Africa.

“This ordination takes place under the duress of the pandemic,” Bishop John H. Ricard, SSJ, superior general, said in his homily. “In 1995, I went to Uganda. They were ordaining young men for the priesthood under the radar of the genocide, which was taking place at that time, and so they had to do the ordination quietly – almost in secret – because it was so dangerous then.

“Later on, with CRS (Catholic Relief Services), I went to Bosnia, Eastern Europe. The bishop who was there in Sarajevo was ordaining two young men for the priesthood in secret because he couldn’t do it in public.”

Today, despite the limitations imposed by the pandemic, ordinations proceed.

“The point is that the Church goes on,” Bishop Ricard said. “The priesthood goes on despite wars, persecutions and pandemics.”

The bishop made a special point to give a shout-out to Father Kaddu’s mother.

“She is on the other side of the world in Uganda watching this,” he said. “I’m sure she is like any other mother of priests, and wants to be here with her son, but can’t.”

Father Kaddu’s brother, Pius Kayanja, who also watched from Uganda, said he had mixed feelings about the ordination.

“Fred is becoming the first priest in the family and we can’t take even a memorial photo together; we can’t embrace him, though we would love doing it,” he said. “On one hand, I really thank the almighty God who gave knowledge to the inventor of this technology. I can’t imagine how I would feel if this event took place without following it at all.”

Father Kaddu knew he wanted to be a missionary from the time he was in high school seminary. After learning about the Josephites from a friend of the then-superior general of the society, Father Kaddu began reading.

“I (saw) the work they were doing ministering to the community – love and promoting social justice,” he said. “I want to go all over the world proclaiming the Good news bringing hope (and) bringing love to the people.”

Father Kaddu said he was inspired by the Josephites’ charism of social justice.

“They use the Gospel teaching to promote love and hope,” Father Kaddu said. “Everyone is loved. Everyone matters.”

Father Kaddu has now been in the United States for seven years. He completed his pre-theology at the Dominican House of Studies, then entered his novitiate. He studied theology at the Catholic University of America in Washington, D.C., where he graduated in May 2019.

Each year he was assigned to work in a parish – most recently at St. Peter Claver/St. Pius V/St. Gregory the Great church in Baltimore – and has also ministered in hospitals.

“It has been so wonderful to see the love of people (and) how committed they are to the parish,” Father Kaddu said. “They are so committed to working together.”

The parish families, he said, have been his support system, praying for him, inviting him to spend holidays with them and inviting him for lunches and dinners.

“I have no family here,” Father Kaddu said. “Each parish that I have been to – they have been my fathers and my mothers and my sisters and my brothers and they’ve supported me so much.”

While studying to become a Josephite, Father Kaddu has learned how the priests truly love their flocks.

“Show love to the people you’re ministering to,” he said. “When you show love, they’ll love you back.”

That also means being present to the people, something Father Kaddu does by talking to them, phone calls, sending flowers when someone dies, and checking on and visiting those who are sick.

Many of the parishioners who have been impacted by Father Kaddu’s time at their parishes were present by livestream at his ordination. Congratulations flurried in on the YouTube comment section – some in English, some in Nyanja and other common African languages – as the Mass continued.

“Fred’s ordination is going to be the ordination of a pandemic priest,” Bishop Ricard said in his closing remarks. “Fred, we’re not going to leave you with that label.”

Father Kaddu said his ordination was “simple, but I was filled with joy.”

“I feel just joy and happiness,” Father Kaddu said. “God answered my prayer and it is so beautiful.”

He enjoyed reading the comments from the live streamed ordination, but got an extra surprise following his first Mass the day after his ordination outside of St. Peter Claver and St. Pius V church.

Parishioners arranged a parade of cars – Father Kaddu estimates about 50 – with signs, gifts and honking as a show of support.

Father Kaddu said he cannot wait to begin ministering in his next parish in his first official assignment.

“I can’t wait,” he said. “I can’t wait to be the kind of priest who is there to accompany people.” 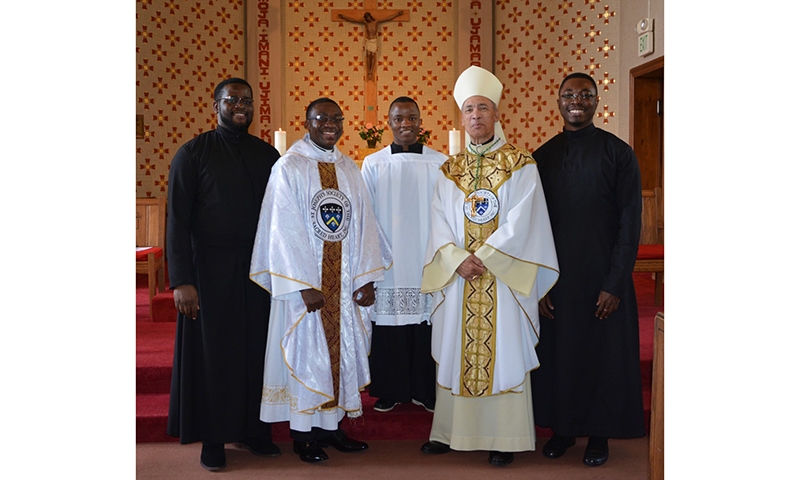 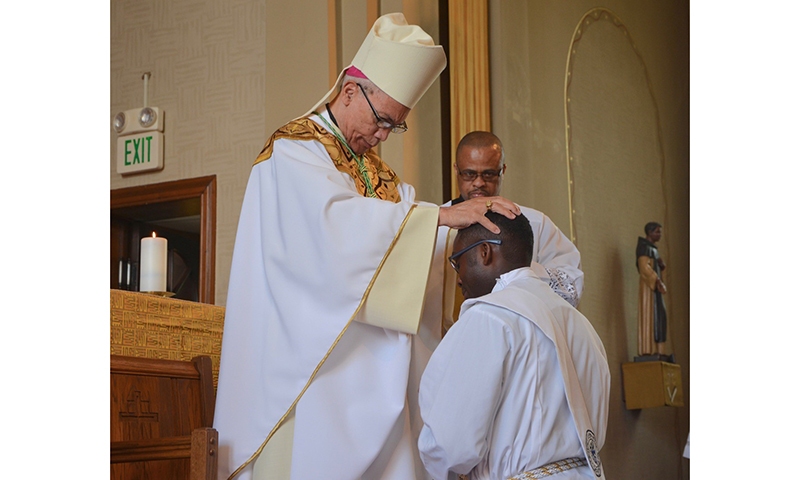 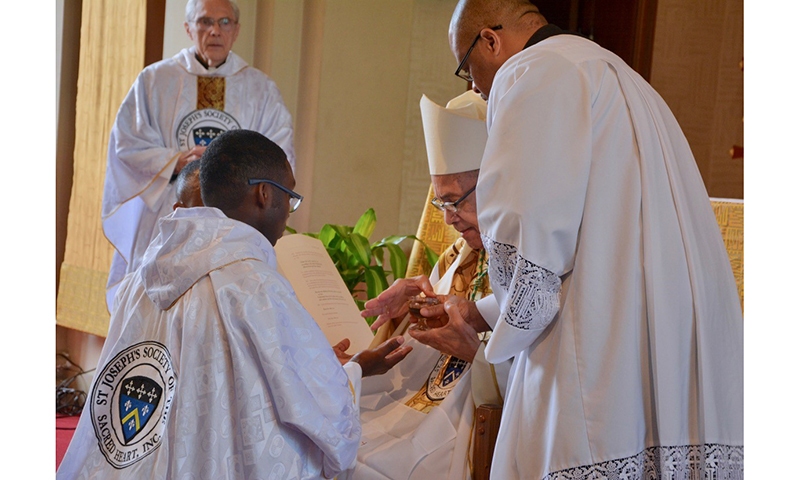 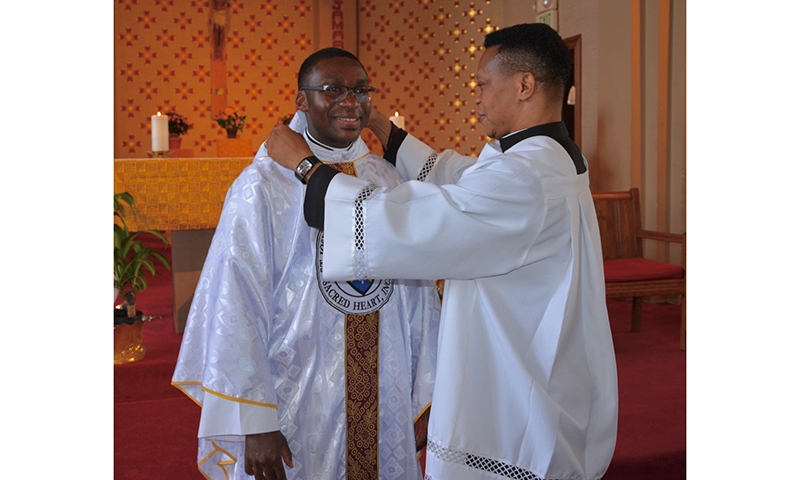 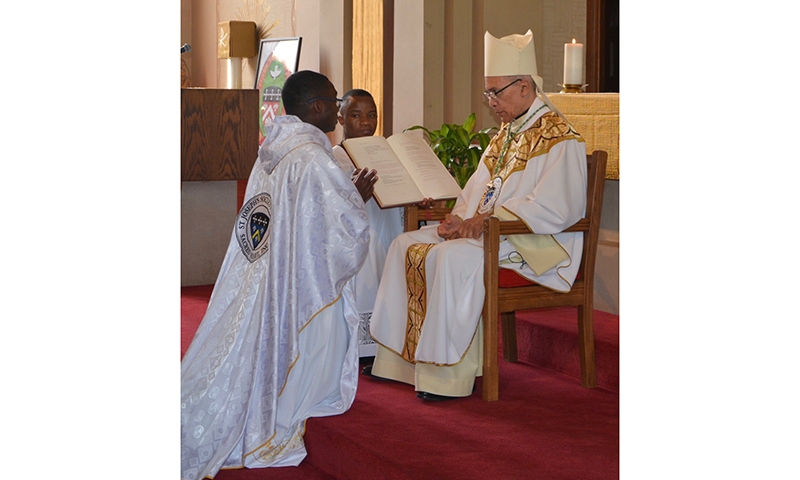 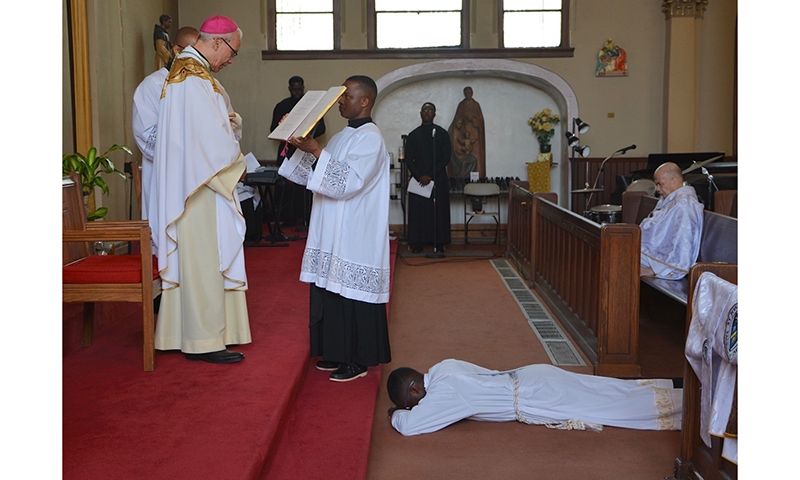 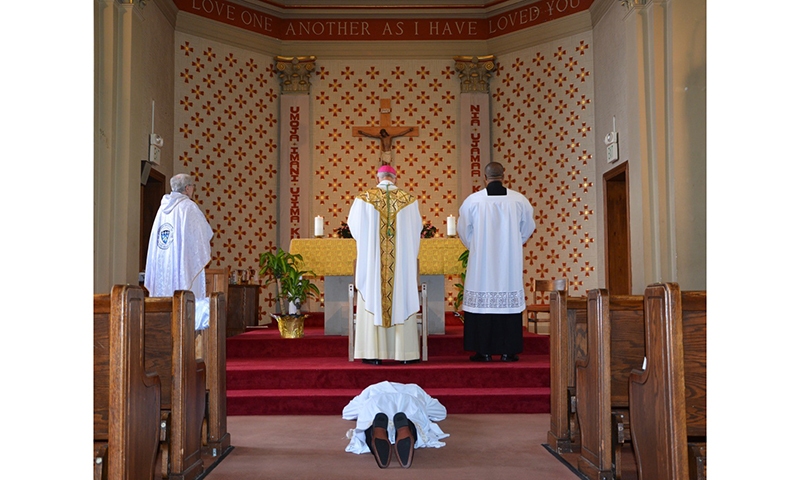 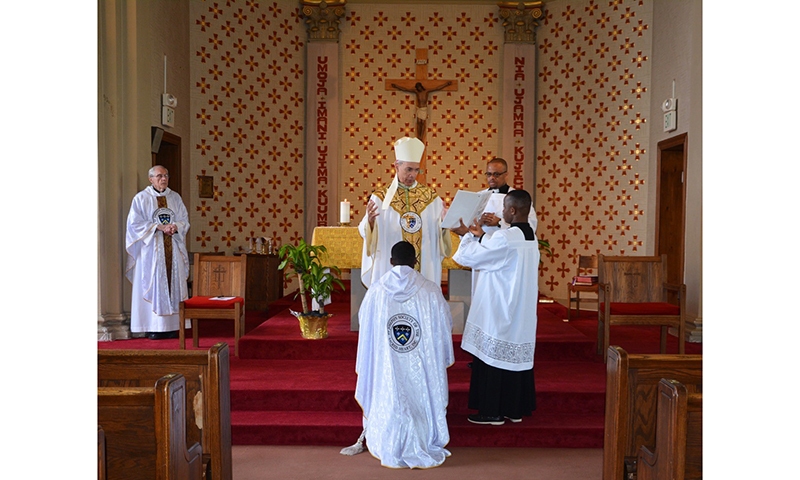 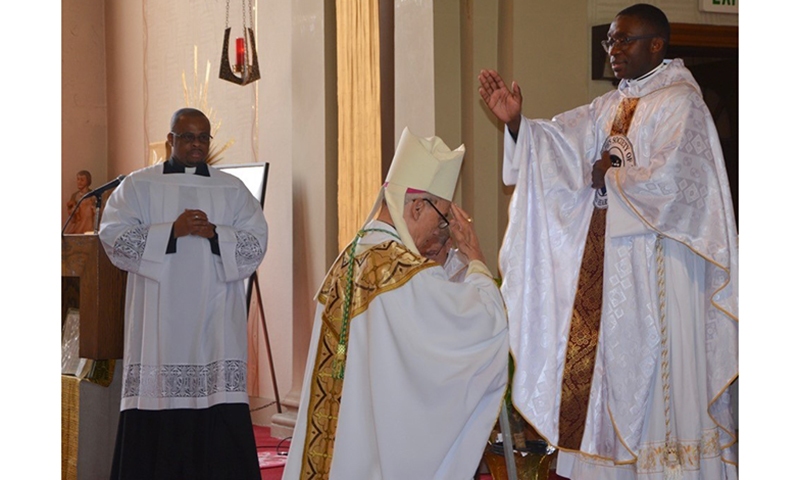 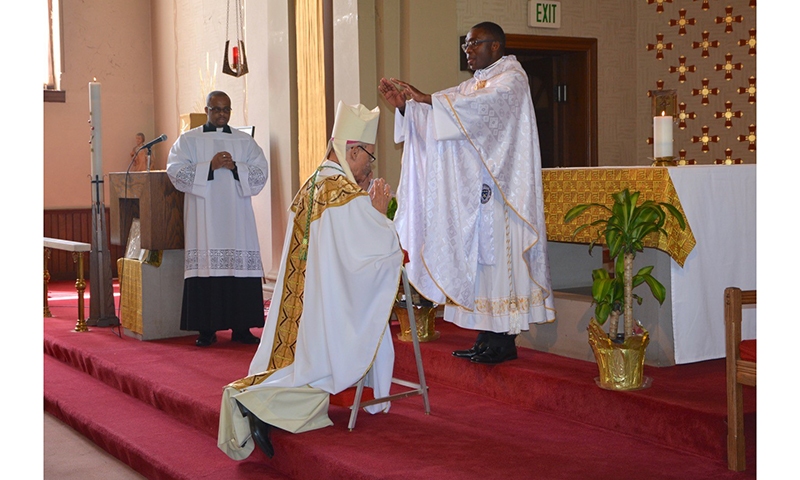 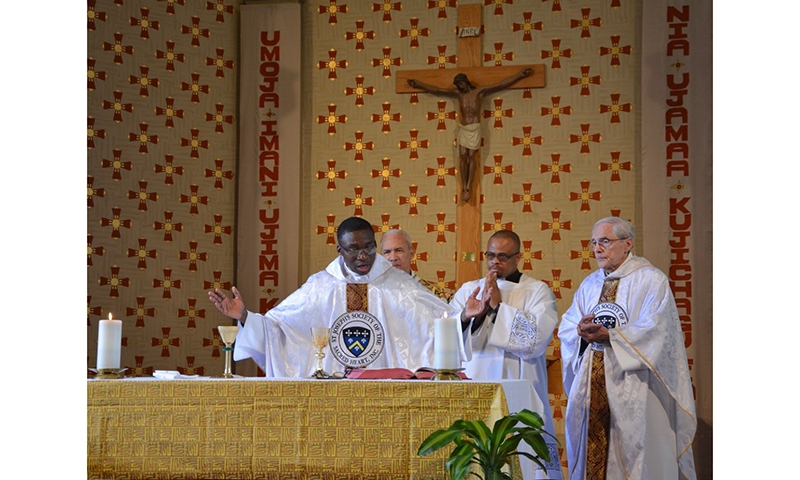 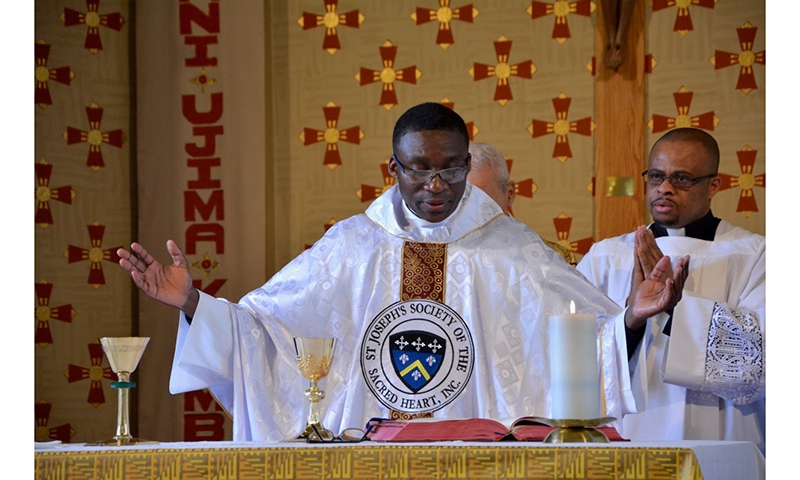 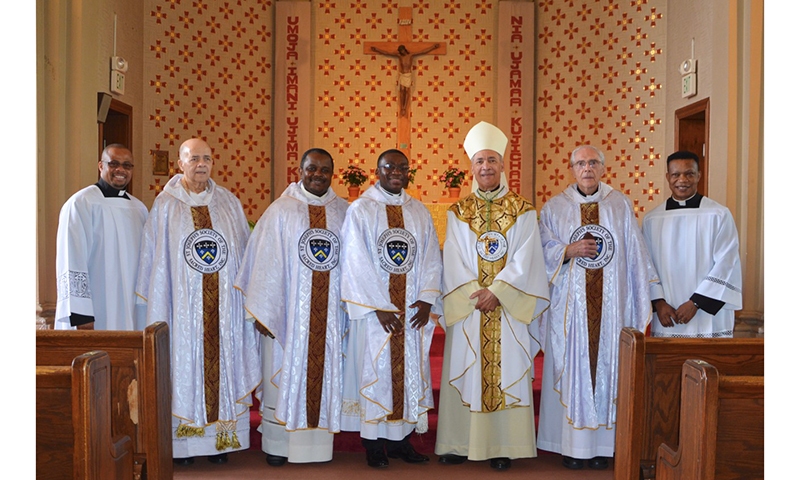 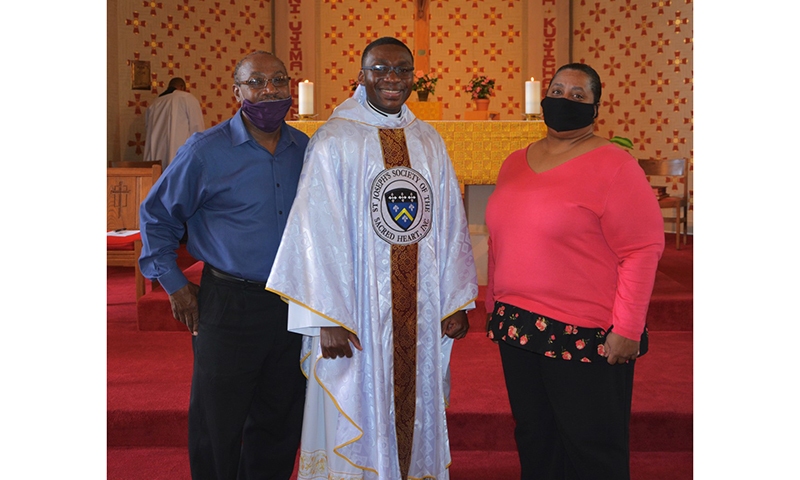 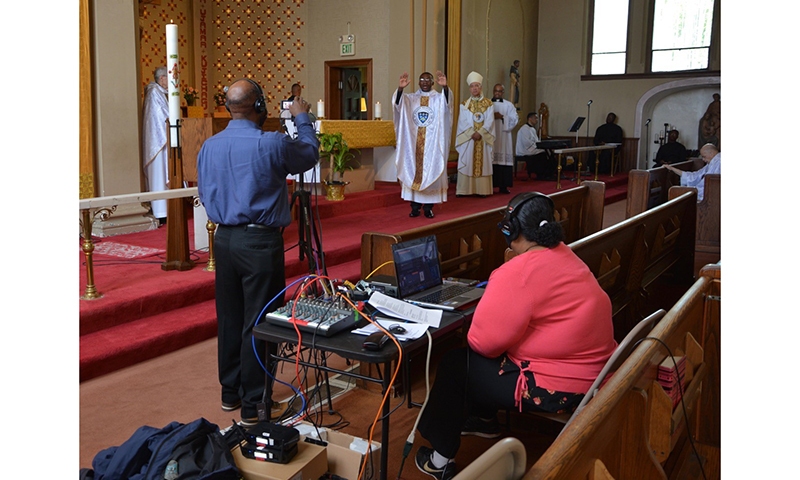