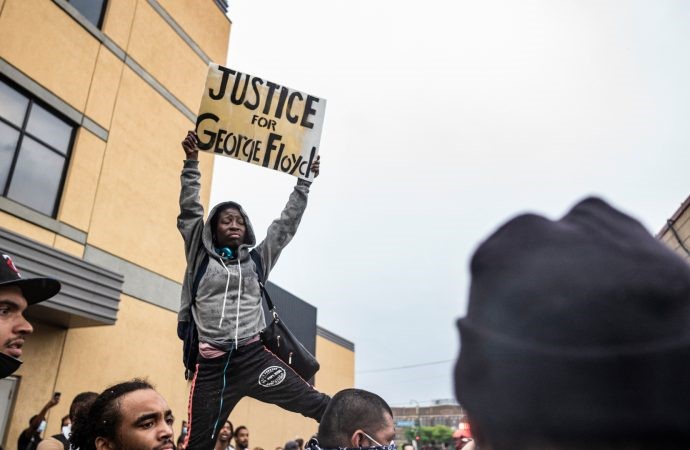 Catholics are calling the murder of George Floyd yet another example of a continuing blind spot toward the racism that has plagued the United States since its founding, evidenced by the continuous use of police brutality against African Americans and silence of many Catholic leaders in the face of it.

Floyd, a 46-year-old black man, died on Monday after police officers violently pinned him down in Minneapolis in response to a call about a man suspected of forgery.

A video of him pleading with police officers while saying “I can’t breathe,” has gone viral, sparking protests in the Minnesota state capital over the last 48 hours. Floyd can be seen in the video requesting help and not resisting arrest as onlookers implored the cops to back down. On Tuesday, the Minneapolis Police Chief announced that four responding officers have been fired and that an FBI investigation has commenced.

Gloria Purvis, host of EWTN’s radio show “Morning Glory,” told Crux that Floyd’s death – and the commentary around it – evidences a “blindspot” among white American Catholics, as well as a double standard among pro-life Catholics who fail to see that combatting racism should be an integral part of their pro-life witness.

“I’m really seeing a block,” said Purvis, lamenting that for her fellow pro-life advocates, “the pro-life argument seems to be lost on the black person outside of the womb.”

She said that she was particularly frustrated that when it comes to police brutality against black individuals, there “seems to be an effort to take the focal point off the victim,” often by either making excuses for the police officers or an “impulse to imply that there’s guilt” on the part of the victim.

“This is a problem. There is a coordinated effort to oppress black people,” says the Charleston, South Carolina native who regularly uses her morning radio show and social media to amplify the concerns of black Catholics in the face of racial injustice.

In addition to planning a new series to examine the historical inequities faced by black women and men in the United States, Purvis says she wants to see more white Catholics challenging fellow white Catholics to confront their own prejudices.

“I’m encouraging white people to use their voice. Often they can say things in a room to one another that they won’t say in person,” she told Crux. “That’s a time when no one else is looking that you stand up for Jesus, that’s how you get to be a saint.”

She also says she’s frustrated by the double standards of white Catholics who love to talk about the beauty of the Mass, while ignoring the racism that exists in the pews around them. “So many of these individuals cannot see the beauty of the individual made in the image of God sitting next to them if they have dark skin.”

“No, it’s simple,” she says. “Racism is real, it’s a deliberate choice to act, to behave in a manner that purposefully denigrates someone of the other race. And racism makes God into a liar.”

For Olga Marina Segura, author of the forthcoming book, Birth of a Movement: Black Lives Matter and the Catholic Church, the reaction to Floyd’s death has been the same as past incidences of violence against people of color.

“The immediate reaction has been the same: Black and Brown Catholics are outraged and extremely vocal about what it means to try and live and survive in America as a Black person. This a reality that Black and brown people live with every single day not just when we are forced to see what is very clearly a lynching,” she told Crux.

According to the most recent data available, in 2019, 1,099 people died at the hands of the police. Black individuals were 24 percent of those killed despite being only 13 percent of the population.

“I know this is a term that might be uncomfortable for people, especially white Catholics, to hear, but this is what it is to us: George Floyd was extrajudicially killed by a white police officer and his death – like every recorded black death – has turned into a kind of voyeuristic spectacle for people,” she continued.

In a statement to Crux, Jason Adkins, the executive director and general counsel Minnesota Catholic Conference, said that “Mr. Floyd’s death is a tragedy; the lack of humanity seen in the video is appalling.”

“It is good that state and federal investigators are already looking into the incident so that the truth can come to light, justice can be done, and reforms can be made,” the statement continued. “People need to feel safe in their communities and have trust in law enforcement, who should exercise their authority in a spirit of service.”

Adkins words mirrored that of the state’s Democratic governor, along with the state’s commissioner of public safety and attorney general, both of whom are African Americans, who, along with community leaders, were initially hesitant to use the phrase “murder” in referring to Floyd’s death before an investigation had commenced.

In another statement, issued on Wednesday, Archbishop Bernard Hebda of Saint Paul-Minneapolis called the events “gut-wrenching” and “deeply disturbing.”

“The sadness and pain are intense,” said Hebda. “Let us pray for comfort for his grieving family and friends, peace for a hurting community and prudence while the process moves forward. We need a full investigation that results in rightful accountability and veritable justice.”

“Particularly at this time when human fragility has been brought into focus by the Covid-19 pandemic, we are called to respect the worth and dignity of each individual, whether they be civilians in need of protection or law enforcement officers charged with providing that protection. All human life is sacred,” he continued.

Yet for Catholics such as Segura, words are not nearly enough. Despite the fact that in 2018, the U.S. bishops issued its first collective letter on racism in nearly 40 years, Segura said much of what has followed has been empty rhetoric and promises.

In a November 2019 article for America magazine, Segura chronicled her outreach to every Catholic diocese in the country, only to find that a small percentage of dioceses had sought to enact new programs in response to the letter.

“George Floyd was murdered in broad daylight and this was all they could muster?” Segura told Crux. “These words are an utter disappointment and an example of the cowardice so many of us have come to expect from bishops and other leaders.”

“I’m at a loss for words. I’m struggling to contain my anger and disgust with the pathetic, anemic Catholic response to the blatant disregard for Black life – for human life – that we saw in Minneapolis,” he told Crux.

“There is neither outrage nor condemnation of a gross violation of human dignity. Nor any call to examine the culture of policing that regularly results in such terrible injustices,” he continued.

“Sadly, this is not surprising. This is the consistent pattern with Catholic engagement with racism. When it is acknowledged, it is only with bland sentiments of concern that are calculated to not disturb white Catholics. Church leaders rarely have the courage to address how central white racial resentment and fragility are in shaping our public life,” said Massingale. “They are more concerned with the comfort of white people than the terror that racism forces people of color to live with.”

“Pathetic, anemic responses to what Pope John Paul II called ‘the most persistent and destructive evil of the nation’ are evidence of Catholic complicity in injustice and unjust deaths,” Massingale added.

Purvis concurred, saying that it’s past time for Catholics to prioritize the fight against racism, not because there’s pressure to do so, and not merely to honor the memory of George Floyd, but because it’s intrinstic to the Catholic faith.