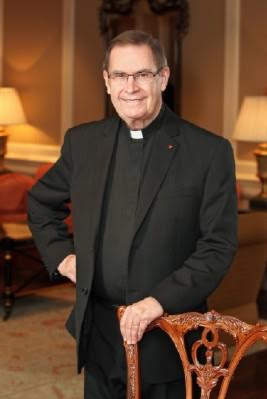 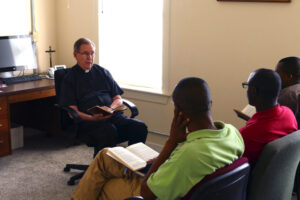 Josephite Father Joseph Doyle, a longtime leader of St. Augustine High School in New Orleans who later worked with young men preparing to become Josephite priests and brothers, died of pancreatic cancer Nov. 2, 2021, at Chateau de Notre Dame in New Orleans. A Josephite for more than half a century, he was 82.

“Father Doyle was a very loyal and hardworking Josephite for many years,” said Bishop John Ricard, Josephite superior general. “He has served in many capacities for the Josephites. He was a mentor to young men. He excelled at that, and they loved him.”

Bishop Ricard, who attended seminary with Father Doyle, said the community at St. Augustine High School admired Father Doyle and had great faith and trust in him. The second president of the school from 1992 to 2010, Father Doyle led St. Augustine through many trials, including Hurricane Katrina.

“He was very well loved,” said Bishop Ricard. “I don’t think he had an enemy in the whole entire world.”

Aulston Taylor, who became president of St. Augustine High School in June, had known Father Doyle since 1994, when he first started as a student at the school.

“He had a great impact on our school and its growth,” he said. “Father Doyle was the voice for the school in the community. So much good came from his efforts. He was very well respected and a great advocate for St. Augustine.”

Mr. Taylor said Father Doyle launched the school’s second capital campaign, which enabled St. Augustine High School to expand its footprint by bringing a third building to campus. Besides being an ambassador for growth for the school, Father Doyle was special to Mr. Taylor personally.

“Father Doyle has been a great mentor to me,” Mr. Taylor said. “Being a student at St. Augustine from 1994 to 1998 would not have been possible for me if it were not for Father Doyle and my mom.”

“I never imagined that I could follow in his footsteps as president of St. Augustine High School,” Mr. Taylor said. “Without Father Doyle, I would not be where I am today.”

Born in Baltimore, Md., Father Doyle first learned about the Josephites as a student at Immaculate Conception School in Towson, Md., where he read copies of The Josephite Harvest. Inspired by Josephite ministry, he entered the Josephite minor seminary in Newburgh, New York in 1961. After completing his theological training at St. Joseph Seminary, he was ordained at Holy Comforter/St. Cyprian Church in Washington by Archbishop Patrick O’ Boyle on June 1, 1968.

Father Doyle’s first assignment was as associate pastor at Holy Family church in Natchez, Mississippi. After two years, he became Newman chaplain at Tuskegee Institute, and then served at several parishes in Texas before settling in at St. Augustine High School in New Orleans in 1988. He stayed for 25 years, moving from theology teacher to president and later, president emeritus and chief religious officer.

In a Summer 2018 Josephite Harvest article about Josephites observing milestone jubilees, Father Doyle reflected on 50 years as a Josephite. Time spent in the communities and schools in which he served were among his most rewarding, he said, alongside meeting St. John Paul II, celebrating Mass in Czestochowa, Poland, and co-founding the Women’s Life Center, a crisis pregnancy center in New Orleans.

“The best part about serving the African-American community is the spirituality,” Father Doyle  said. “Their deep faith, their approach to suffering – not just physical, or through poverty, but emotional suffering through prejudice and discrimination.”

Father Doyle had a master’s degree in theology from St. Joseph Seminary, Washington, D.C. and a doctorate in ministry from Perkins School of Theology, Southern Methodist University and an honorary doctor of letters from Wheeling Jesuit University.

He enjoyed writing, and he was a nationally published author and commentator.

His book, “When Jesus was Twelve,” is a historical fiction novel about the Holy Family in the life and times of Jesus as a boy with Joseph and Mary.

Father Doyle, who had been a co-chaplain of Legatus New Orleans Chapter, had been on sabbatical since June 2020.

While he loved New Orleans and adopted the city as his home, Father Doyle also had a passion for the Holy Land. As a Knight Commander of the Equestrian Order of the Holy Sepulchre, he led many pilgrimages to the Holy Land, according to Bishop Ricard.

“I am very happy he is at peace with God,” Bishop Ricard said. “Father Doyle is prepared to meet with God whom he served so well.”