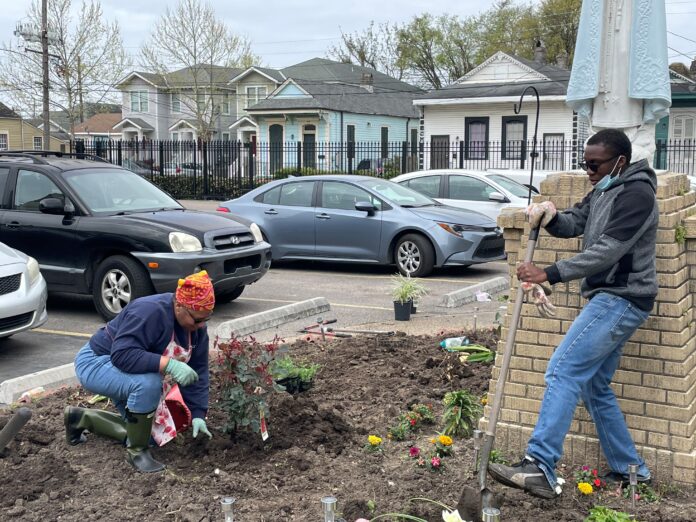 At Corpus Christi Epiphany Church in New Orleans, parishioners come not only for Masses and prayers but also offer extensive volunteer work.

In addition to her employment  at the hospital as a nurse, Donna Dunn serves her parish in many ways, including washing church linens of every week.

After the Katrina,  Ms. Dunn worked with Father Ray Bomberger, SSJ, to set up a beautiful garden around Blessed Mary’s statue.

She started a garden ministry/club which was joined with several other parishioners. As the time went by, some members died whereas others migrated leading to the collapse of this ministry due to lack of personnel to water and maintain the beautiful gardens.

Now, Ms. Dunn said she is now the happiest person in the world because her garden ministry/club is being recovered.

Though a nurse, Ms. Dunn’s vehicle is full of garden tools. She loves gardening.

Josephite Father Fred Kaddu, spoke about the garden ministry/club during a Sunday Mass. Then, he and Ms. Dunn cut down the old plants, shrubs, tilled the soil and bought new plants and flowers.

“We’re transforming Father Bomberger’s initial garden into a Mary’s Garden,” Father Kaddu said. “All the plants, shrubs, flowers, Herbs and trees are all going to be named for Mary.”

Mary’s Garden was blessed in May, which is the month of Our Lady.

Prayer for the African-American Family